Despite the numerous observations carried out during the relatively long period of BG exploration there still remained a number of important scientific questions related to this region. The major reason for the initiation of the BG Exploration Project in 2003 was to field an experiment designed to test the hypothesis of Proshutinsky et al. [2002, hereinafter referred to as P2002] on the origin of the salinity minimum in the center of the BG (Figure 1). Hydrographic climatology shows that because of this salinity minimum, which extends from the surface to 400 m depth (Figure 2), the Canada Basin contains approximately 45,000 km3 of fresh water [Aagaard and Carmack, 1989]. This value calculated relative to a reference mean salinity (34.8) of the Arctic Ocean specifies how much fresh water is accumulated in this region from different sources (ice melting and freezing, rivers, atmospheric precipitation and water transport from the Pacific and Atlantic Oceans via straits).

P2002 hypothesized (see Figure 2) that in winter, the wind (a dynamic factor) drives the ice and ocean in a clockwise (anticyclonic) sense so that the BG accumulates fresh water mechanically through a deformation of the salinity field (Ekman convergence and subsequent downwelling). In summer, winds (Figure 2) are weaker (and may even reverse to be counterclockwise) and the summer resultant anomaly in Ekman convergence releases fresh water, thereby relaxing salinity gradients and reducing BG Fresh Water Content (FWC). P2002 tested this mechanical hypothesis for fresh water accumulation and release by employing a relatively simple model (Figure 2, bottom panels) where wind was the major driving force (the influences of sea ice and ocean thermodynamics were neglected). At the same time, P2002 pointed out that thermodynamic processes may also be important – in winter, ice growth and subsequent salt release reduce the FWC of the BG, and in summer ice melt increases the FWC. The interplay between dynamic and thermodynamic forcing is no doubt complicated. These mechanisms of the seasonal fresh water transformations was investigated by Proshutinsky et al [2009] and are provided in section FWC seasonal transformations.

Our analysis of recent changes in the atmospheric forcing over the Arctic Ocean (Proshutinsky et al., 2018) for the entire 2017 showed that the atmospheric circulation regime in 2017 was predominantly cyclonic (for the first time since 1997), with a small anticyclonic cell in the southeastern BG region. SLP distributions in 2016-2017 were similar to conditions observed in 1988-1989 when the 1983-1988 ACCR shifted to a CCR that lasted from 1989-1996 (Proshutinsky et al., 2015). We hypothesize that the 2017 shift to CCR could be a precursor for a CCR to dominate for the next 3-5 years, resembling the 1989-1996 tendencies. A cyclonic regime has generally been associated with some increase and stabilization of sea ice extent, intensification of Atlantic water transport via Fram Strait, weakened Siberian river runoff, decreased BG FWC, and FW release to the North Atlantic (Proshutinsky et al., 1999).  It is also expected that sea ice extent minimum in 2018 will be similar to 2017 or increased because cyclonic winds keep sea-ice in the Arctic which reduces rates of ice melt due to ice-albedo feedback. Therefore, continuing BGOS observations in 2019 and 2020 are likely to detect and quantify FW release from the BG region, which has never been documented before.

On the other hand, the current ACCR could persist longer. Proshutinsky et al. (2015) also hypothesized that the intensification of Greenland ice sheet melt can stabilize the ACCR in the Arctic, in which case it would again be imperative to continue observations in the BG to measure and understand the extraordinary novel changes in all environmental parameters that resulted from an unprecedented domination of the ACCR. Under long-term ACCR, some stabilization of the BG FWC accumulation could be expected based on at least two new hypotheses.

In one of them, eddies generated by baroclinic instabilities associated with FW redistribution in different layers of the BG have been shown to balance the wind-driven momentum flux into the BG, and limit FW accumulation (e.g., Manucharyan and Spall, 2016; Meneghello et al., 2017). An alternative hypothesis is that intensification of the BG geostrophic circulation by long-term anticyclonic winds have changed friction at the ice-ocean interface that slows down Ekman pumping and is favorable to reduction of downwelling and BG FWC (e.g. Proshutinsky et al., 2002; Meneghello et al., 2018; Zhong et al., 2018; Dewey et al., 2018).

One more important factor adding a new layer of complexity to understanding the BG changes is that the perceived saturation of BG region FWC has to relate strongly to fluctuations in the timing and availability of FW for accumulation (Proshutinsky et al., 2009). It is clear that without additional FW coming from sea ice, P-E, Pacific Ocean and river runoff, even under favorable wind conditions. no FW accumulation could be expected (Proshutinsky et al., 2018).

Finally, at the current state of our knowledge, we assume that all processes and mechanisms discussed above are important for the dynamics and thermodynamics of the BG physical system and have profound influences on the bio-geochemical processes regulating marine ecosystems. Although the long-term data have been critical for formulating and evaluating different hypotheses, there still remains uncertainty in the dominant mechanisms that can only be addressed with continued observations and synthesis of modeling and observations. 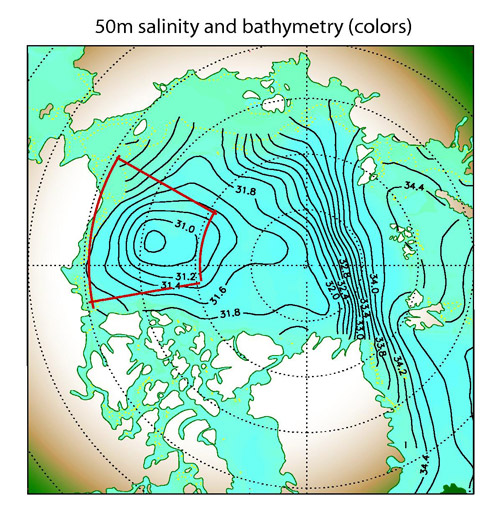 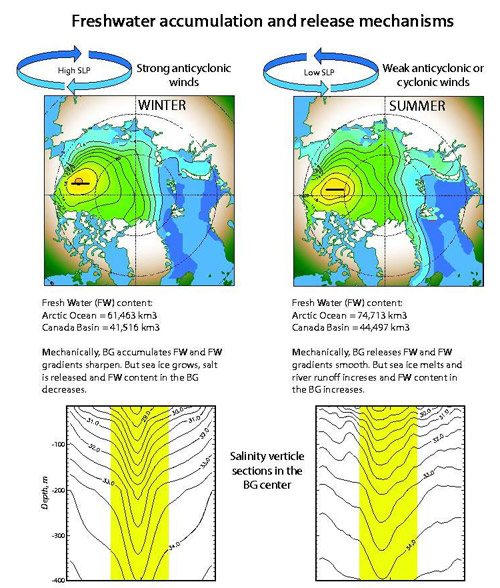 Figure 2. Panels show conceptual mechanisms of freshwater accumulation and release in the BG during a seasonal cycle. Freshwater content in summer and winter is shown in meters (isolines) calculated relative to salinity 34.8.