The 18-year Canada Basin zooplankton time series continues! Although the scientific focus onboard is largely physical oceanography and geochemistry, zooplankton sampling has found its place in the JOIS program.  Zooplankton are important for nutrient recycling and transfer of energy to higher tropic levels as they form the diet of fish, seabirds, and marine mammals. Because of this important role in the food chain, changes to type and abundance has the potential to have widespread effects. By studying zooplankton in complement with water and ice properties we can gain perspective on how the community may respond to changes in their habitat. This time series has become valuable for studying how zooplankton of the Canada Basin are changing with warmer, increasingly acidic, and increasingly ice-free conditions.

Aboard the Louis, zooplankton are sampled using two 150um mesh nets known as a “bongo” net from 100m deep to the surface of the ocean. The nets are equipped with a pressure sensor and flow meter which allows scientists to estimate how much water passed through the nets. Samples are preserved for different types of analysis.

The JOIS zooplankton program focusses on three main topics: tracking the influx of Pacific organisms into the Basin, following how well the pteropod population is doing, and studying how zooplankton communities endemic to the Basin may be shifting in abundance and community composition.

Recent results suggest that a Pacific type of the copepod, Calanus glacialis may be penetrating further into the Canada Basin than observed at the start of our time series.  This suggests a “Pacification” of the Arctic and portend more changes to come.   We will use the specimens collected in 2020 to bring this earlier preliminary observation up to date.   Another important species of interest are the pteropods, also known as the sea butterflies, a delicate creature that propels itself through this water by flapping its ‘wings” and has a shell made out of calcium carbonate, as do clams.  Unfortunately, the shell of the pteropod is subject to dissolution in the increasingly acidic water of the Canada Basin. Study of this organism is of high interest as a “canary in the coal mine” for ocean acidification.  So far, our time series indicates that the size of the pteropod population has been declining since about 2007.  Continued work on our almost 20-year time series will undoubtedly shed further light on what is going on with the zooplankton of Canada Basin and what the future may hold in these days of global warming. 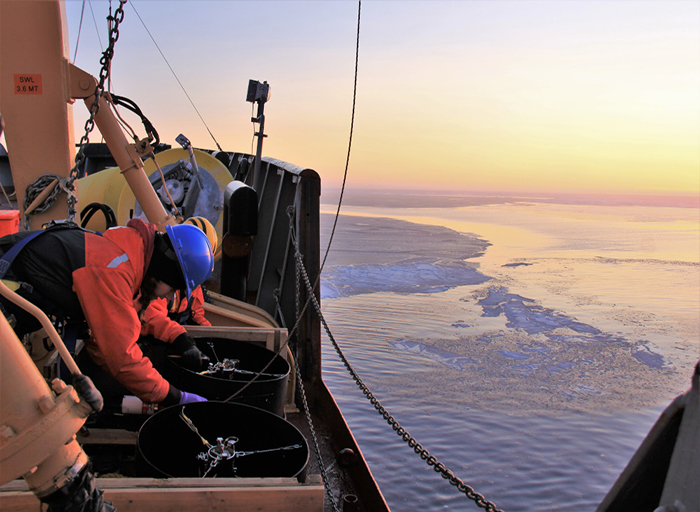 Reading the flow meters on each net. (Sarah Ann Quesnel) 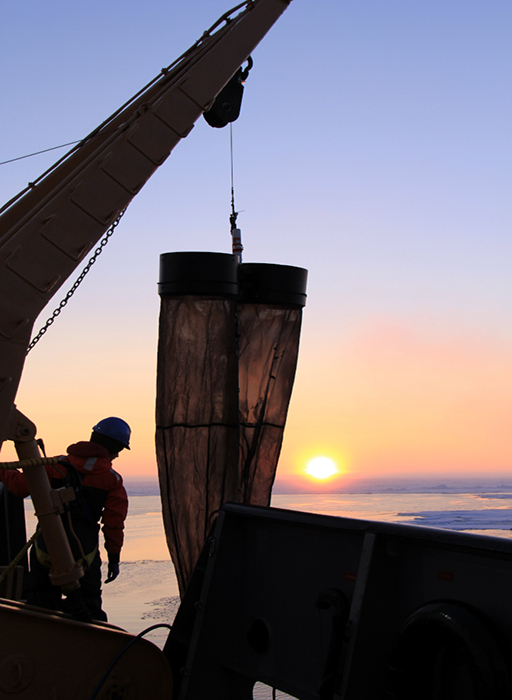 The nets are lowered over the side of the ship using an A-frame. (Sarah Ann Quesnel) 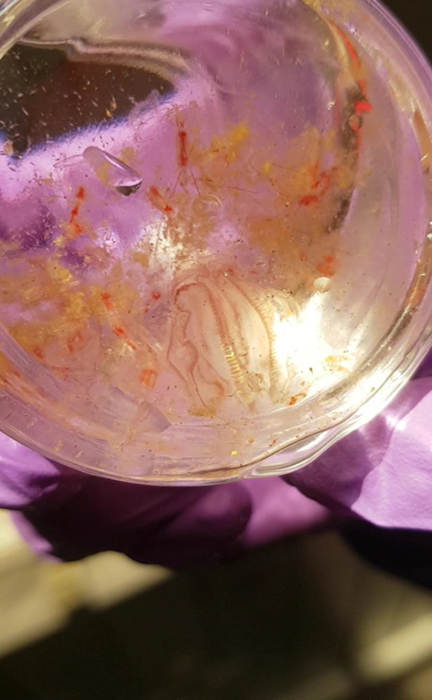 One of the bongo net catches: a comb jelly. (Kim Bedard) 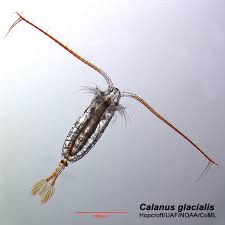 The copepod is one of the most common catches in the zooplankton net with up to 40% of its body being an energy-rich lipid sac. (Image from R. Hopcroft, UAF/NOAA/Census of Marine Life)