The mighty Mackenzie river meanders through Canada’s boreal forests, collecting water from one fifth of Canada’s landmass and pours into the Arctic Ocean. The input of the Mackenzie river is the highest input of river water into the Arctic Ocean from North America. At the start of our last day of sampling, we met up with this river water, under blue skies and surrounded by sparkling ice.

The plume of water that enters the Arctic ocean from the Mackenzie river influences the physics, chemistry and biology of the ocean. From a physical perspective, the input of river water means that there is a supply of low density (warm and fresh) water. This river water stays at the surface of ocean, on top of denser (cold and salty) ocean water similar to how oil floats on water. The layer of river water supplies heat to the water below it and has consequences on the global-scale circulation of water and ultimately, the climate. The river water also contributes to the layering of the Arctic Ocean by density which reduces mixing between layers (think of how hard you need to shake a jar of oil and water in order to get them to mix!). The river transports many chemical compounds that are necessary to the biology of the ocean: organic matter (see dispatch 8) for microbes (see dispatch 19) to feed on and nutrients to feed phytoplankton, for example. Since river input into the Arctic is expected to increase due to warming of the planet, it is critical to monitor this aspect of Arctic oceanography to understand how the Arctic Ocean will change across these processes.

The “Mackenzie line”, the final leg of our sampling plan, is a series of stations that follow the 140W line of longitude, toward the mouth of the Mackenzie river. The series of stations began at a depth of 2500m and ended 28 miles off the coast, at a depth of 60m. We sampled from 7 of these stations over 24 hours. This meant the rosette shack was bustling; not long after we began to draw water from the rosette, we were receiving calls from the bridge that we had arrived at the next station! Overnight, we also had to contend with a building storm of 40 knot winds, a 5m swell and low visibility due to snow. Unfortunately, this meant we could not safely lower our zooplankton nets into the water. Above us, a flag had ripped and was thrashing against a pole. Our zooplankton nets would have likely had a similar fate.  From sunny skies to an intense sea state, we finished the Mackenzie line and our last sampling day in the wink of an eye. 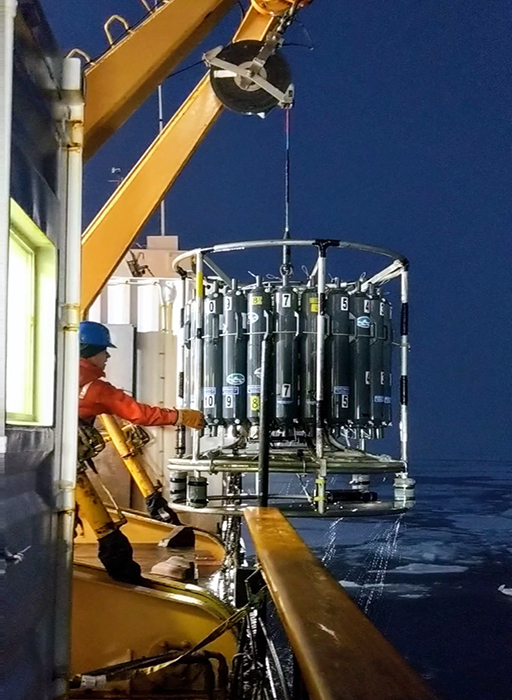 Working the rosette in an intense sea state. (Birgit Rogalla)

The progression of the sea state on the Mackenzie line. (Bridge Mounted Ice Camera)