Dissolved organic matter (DOM) fuels the life of the tiniest creatures in the ocean (stay tuned for more!) which in turn supports the marine food web, all the way up to polar bears.  In the ocean, fuel (carbon) sources include plankton that eat CO2, plankton that eat organic matter and organic matter that comes from land. Dissolved organic matter makes up a part of each of these fuel sources. In fact, the amount of carbon in DOM present in the oceans is greater than the carbon that makes up the all the land plants and animals combined. Although critical for the functioning of the marine ecosystem, most of the DOM in the ocean is not usable as fuel for any lifeform. Most of this carbon from DOM is therefore hidden away in the ocean for millennia. The long-term storage of carbon in the ocean stabilizes the global climate. Knowing about how DOM is transformed is important for the basic understanding of the marine carbon cycle and understanding how the marine carbon cycle will respond to climate change.

As the Arctic warms, much more terrestrial DOM is expected to enter the Arctic Ocean. The Arctic Ocean is greatly influenced by water from land: about 11% of the earth’s freshwater and permafrost melt containing vast amounts of soil enters the water column. Whether this terrestrial DOM is eaten and/or hidden away in the ocean is under active research here on the Louis St- Laurent.

Starting from the Labrador Sea, seawater has been continuously pumped from the surface of the ocean to the main lab where new to this year, fluorescent dissolved organic matter (FDOM) is measured every 15 seconds. Prof. Celine Guéguen and Nicolas Sylvestre (University of Sherbrooke, image 1) are two of the people you’re sure to encounter in the main science lab as they calibrate the measurements made from their new instrument.

The instrument, called a fluorometer (image 2), sends light through a sample of seawater (excitation) and detects the emission of light (fluorescence) from the sample. A mesmerizing graph results (image 3) which allows the FDOM team to see what kind of organic matter is present in the seawater. Dissolved organic matter originating from land has a particular signal within these graphs and is of special interest in the context of the Arctic ocean. Not only will the team collect FDOM measurements from the surface while we’re steaming, but at stations all throughout the water column in the Canada Basin. With this, Celine and Nicolas strive to get a comprehensive picture of FDOM in the changing Arctic ocean. 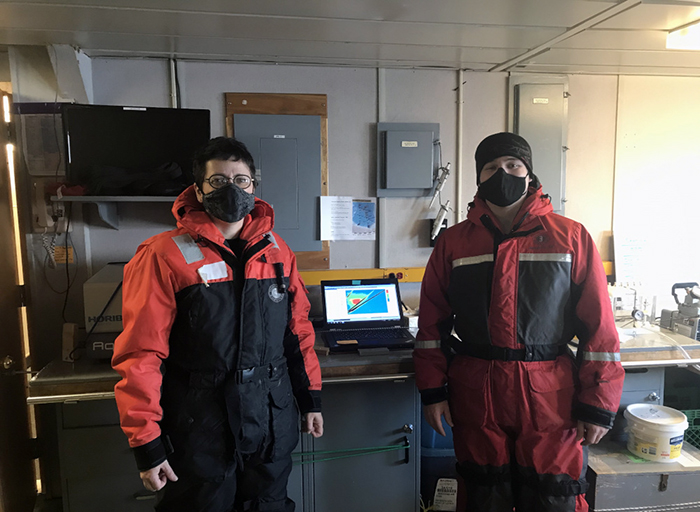 The FDOM team is ready for any disaster. (Susie McLatchie) 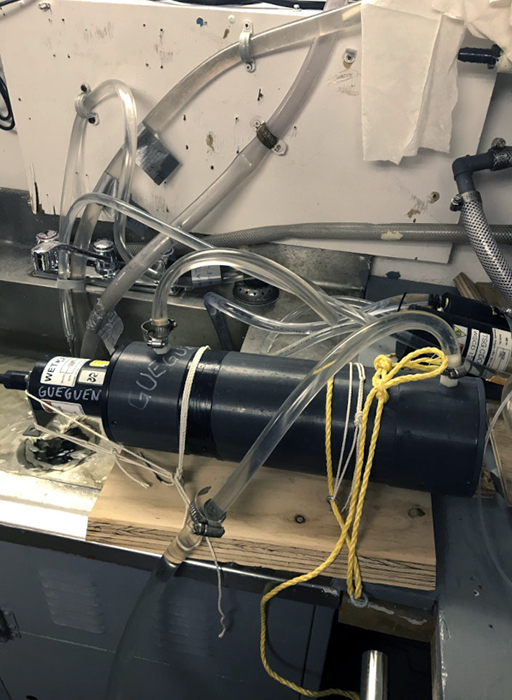 The new fluorometer is connected to a pump which takes seawater from the surface of the ocean. (Susie McLatchie) 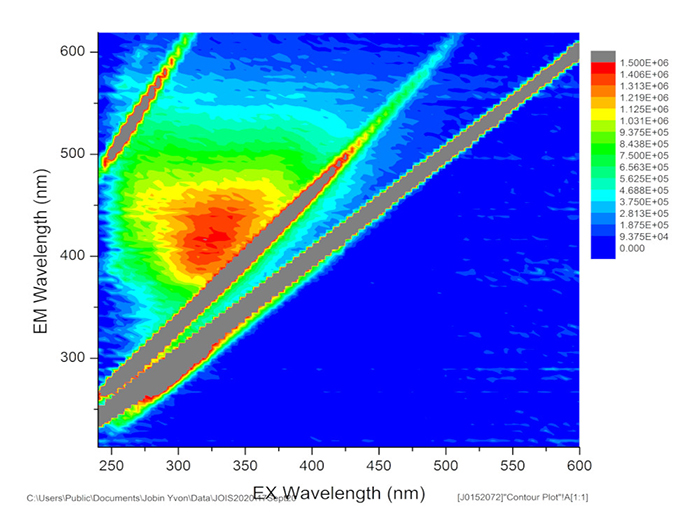 Excitation/emission plot of a sample of seawater.