As we steam along the Labrador coast, science crew run around "Rosie", our noble niskin bottle and sensor carrying steed (also known as a rosette), changing o-rings, testing springs and hooking lanyards like busy bees all in preparation for the test cast. The lanyards are used to cock the niskin bottles open before deployment and each is released on the up-cast to collect a water sample. If a bottle were to go to depth closed, it would implode because of the immense pressure! With a secured spring, the bottle snaps shut once fired retaining a water sample from only the chosen depth. The 24 bottles around the rosette allow for a large number of sample depths with redundancy.

Along with the 24 bottles, Rosie is equipped with a CTD and several auxiliary sensors nested at the bottom inside the aluminium frame. The CTD measures conductivity, temperature and depth while some of the additional sensors included onboard measure various parameters such as dissolved oxygen and surface light received among many others.

All assembled, the rosette weighs several hundred kilograms thus requiring a hydraulic winch to lift it with an accompanying block hung from an A-frame to aid in maneuvering the rosette over the side of the vessel and into the water. This requires the help of the ship’s crew to hang the block from the A-frame and operate the winch while the rosette is underwater. Descending to depths up to 4000m, Rosie may be underwater for up to 4 hours!

Once everything was good to go, a test cast was completed to check for leaks in the niskin bottles and confirm the correct operation of the sensors. This test cast also allowed for the CTD team and crew to practice deployment/recovery and communication with each other. After the cast, water samples were taken to ensure the bottles had closed at the intended depths and remained sealed. It is important that the bottles remain sealed after closing on the up-cast so that water from another depth does not mix with the sample. With Rosie tested and tucked away, we are ready to start sampling! 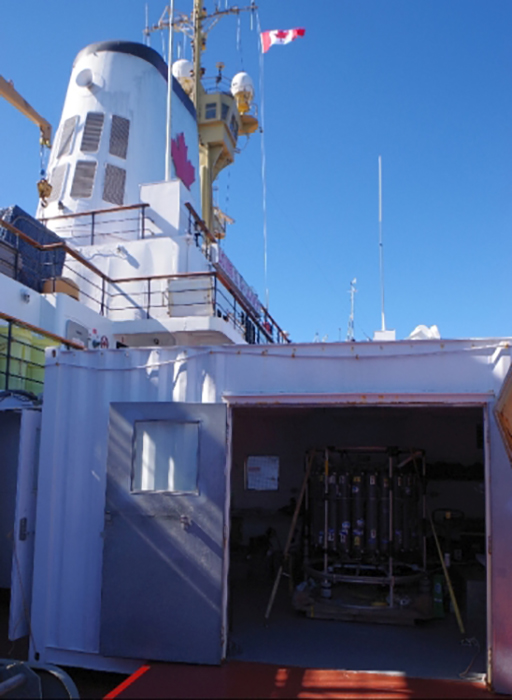 CTD and auxiliary sensors at the bottom of the rosette. (Dave Riedel) 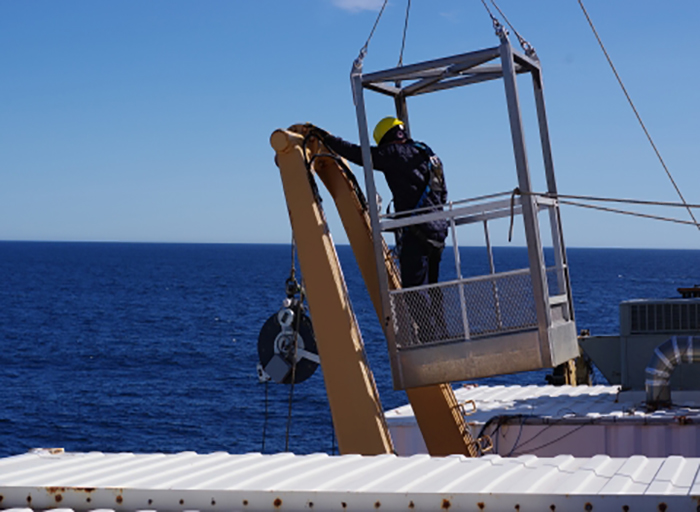 Phil Fowlow in the man basket hanging the block off the A-frame. (Dave Riedel) 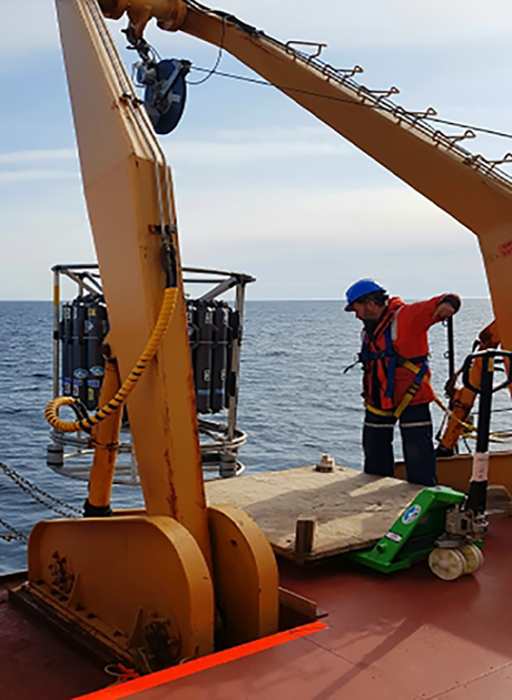